Uber has bought tech company Autocab as it looks to expand its presence in the UK.

Autocab, based in Stockport, provides private hire and taxi operators with technology to run their business, including bookings.

The deal means Uber will be able to start connecting taxi drivers with customers in regions of the country where it currently lacks service, such as Oxford, Tunbridge Wells and Canterbury.

Uber said hundreds of thousands of people in the UK currently open the app each month in places where they cannot request a ride. These locations include Oxford (an average of 67,000 app opens per month), Doncaster (24,000), Swansea (18,000) and Aberdeen (17,000).

The size of the deal has not been revealed.

Jamie Heywood, Uber’s regional general manager for northern and eastern Europe, said: “Autocab has worked successfully with taxi and private hire operators around the world for more than 30 years and Uber has a lot to learn from their experience.

“We look forward to working with the Autocab team to help local operators grow and provide drivers with genuine earnings opportunities.”

Autocab chief executive Safa Alkatab said: “Autocab has been working with local operators across the world to provide the technology to make them more efficient and open up a marketplace to provide more trips.

“Working with Uber we can scale up our ambitions, providing hundreds of thousands of additional trips for our customers, and help cement the place of licensed operators in their local community.”

Uber said Autocab will “remain independent” following the acquisition and will maintain its own board.

Fareed Baloch, Zoom.taxi is clear stating ‘Acquiring 100% stocks of Autocab threatens the small and medium sized taxi companies and their data, who put their trust in Autocab to compete with Uber. It’s a one step closer to push the private hire companies out of business.
Also Autocab is present in 34 countries where it’s either Autocab powered taxi firms or Uber. Bad new for those markets.’

What does this mean for firms that have been using Autocab to compete with Uber? The initial backlash on twitter is evident. 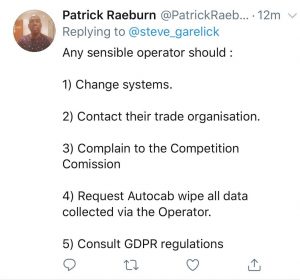