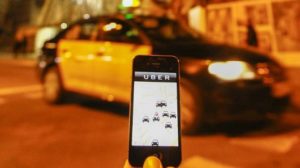 Uber has applied for a patent for a new feature on its app which is says can tell if you are drunk or not.

The hailing app could also feed other information to a driver, including location, the accuracy and speed of typing, if they are pacing and even the angle they are holding their phone at which could be used to determine if they are intoxicated.

The company say it would allow drivers to avoid picking up passengers who are inebriated, but concerns have been raised that it could make targeting vulnerable passengers easier – something called ‘drunk hunting’.

According to the application to the US patent office, the system would spot “uncharacteristic user activity”.

The AI system identifies a user’s level of intoxication based on how they’re holding their phone.

It also identifies if they’re exhibiting ‘uncharacteristic’ behaviour and gives drivers the option to deny them a ride. Uber say this means they can explore the possibility of matching a drink passenger with a suitably trained driver.

The system can alter the parameters of a service based on the prediction about the state of the user requesting the service.’

As well as how the app is being used it will also look at the location, determining whether the pick up is requested from an area with a lot of bars in the early hours of the morning.

It’s most popular feature, however, is likely to be the easy-to-use version of the app that suspected drunks are also presented with.

The app may change the pick-up or drop-off location to somewhere safer or more accessible.

However, experts fear it may allow drivers to undertake ‘drunk hunting’.

But Catriona Bogle from Zoom.taxi said it “raised the possibility of vulnerable passengers being targeted by rogue drivers.”

“There are opportunities for people to be given licenses who should not be, particularly since the deregulation act of 2015,” she said.

“Online applications and a reduction in checks and tests mean that bad apples can be awarded licenses by unscrupulous authorities which puts them in a position of power.

“We already know Uber does not have the best track record in collecting data and Transport for London said it would not renew its operator license based on its safety and security record and cooperation with the police.

“Shining a spotlight on potentially drunk people makes them prey for rogue drivers and could also be used by the company to increase prices – something we know they do in bad weather and for busy periods.”

The applications are both called ‘Virtual Reality Experience For a Vehicle’ and were filed in 2016.

The United States Patent and Trademark Office published them in February.

Uber’s co-founder Travis Kalanick resigned in June 2017 over allegations of sexual harassment at the scandal-hit company.

CNN reported that more than 100 Uber drivers in the US had been accused of sexually assaulting or abusing passengers in the past four years, with 31 drivers convicted of crimes including false imprisonment and rape.

In a statement, Uber said: “We are always exploring ways that our technology can help improve the Uber experience for riders and drivers.

“We file patent applications on many ideas, but not all of them actually become products or features.”