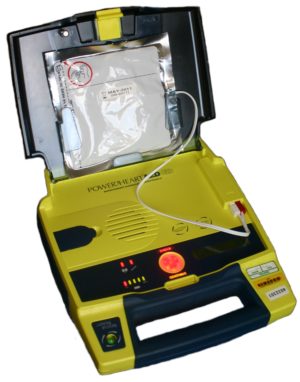 Posted at 09:40h in Driver App by Fareed Baloch
Share

Defibrillators have been installed in 15 taxis in Glasgow as part of an initiative to help save lives by getting fast treatment to patients suffering heart attacks.

Glasgow Taxis, Scotland’s second biggest taxi firm, have installed the machines, which stop a heart of someone in an ‘unstable rhythm’ to try to get the heart to pump properly again.

The company and Defib Machines, their partner in this initiative, have pledged to roll out more of the devices if the initiative is successful.

The drivers will be trained to use the AEDs to assist with any incidents of cardiac arrests near to their cabs as they travel around the city.

Stephen Flynn, chairman of Glasgow Taxis Ltd, said: “We don’t just drive taxis and take people from A to B, we are committed to giving back whether that’s through charitable support, fundraising events or this latest initiative.

“By introducing 15 potentially life-saving defibrillators to our taxis we are utilising the very natural willingness of our drivers to help people along with a test of the benefits of having these machines available in our vehicles, not only for driver use but to the wider communities of Glasgow.

“It’s a modest outlay which we have committed to over a three-year period and if even one machine helps one person in that time, it will have been worth it many times over.”

One of the drivers who will be part of the trial himself suffered heart problems. Stephen Lalley told Express and Star, “I was thinking about it when we got our training, quite often when we pick people up on a dark night and in the rain they’ll say to us: ‘Aw driver, yer a lifesaver.’

“Well that phrase could take on a whole new meaning now.

“I think it’s a brilliant idea and we’re all very proud to represent an organisation which wants to help the people of its city in ways such as this.”

Trixy Sanderson from Zoom.taxi who also works as a first aider said the move “was a positive step towards more people being trained in first aid.”

“Research has shown that the best way to help someone recovering from a heart attack is to start effective chest compressions as soon as possible and deliver a shock via an AED.

“People don’t need to be worried about them – they talk you through what to do and won’t deliver a shock unless it is needed but having them in vehicles like taxis and minicabs means they can get to people more quickly.

“I hope more companies will look towards this pilot scheme and perhaps licensing authorities could consider first aid training as part of their requirements before they hand out a license to taxi and private hire drivers – or offer drivers courses because their freedom of movement makes them ideal people to be able to assist in an emergency.”

David McColgan from British Heart Foundation Scotland welcomed the move, saying: “A cardiac arrest is the ultimate medical emergency and every minute without CPR reduces a person’s chance of survival.

“When someone has a cardiac arrest every second counts and evidence shows that an individual is considerably more likely to survive discharge from hospital, and with favourable outcomes, if shocked by a bystander rather than having to wait for an ambulance.”