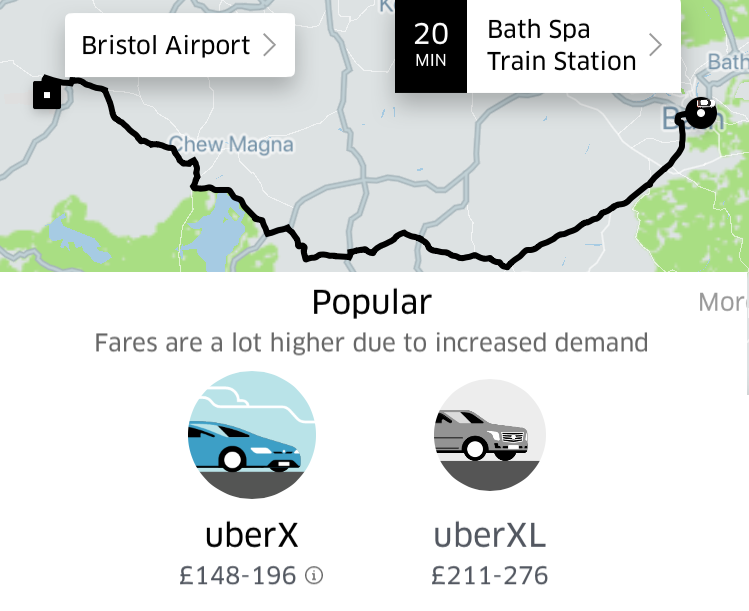 Uber appear to be operating their price surge as the cold weather causes problems for the South West. With trains and buses not running or only operating a limited service, people have been struggling to find ways to travel.

As the area experienced heavy snow which caused the Met Office to issue a red alert, prices to travel between towns by Uber in the area have rocketed.

A trip between Bradford on Avon and Bath Spa railways stations would normally cost about £20 but this has increased by over 400 per cent as the company claims the journey is currently ‘popular’. Meanwhile a journey between Bath Spa station and Bristol airport could be anything up to £196 compared to a normal £56 fare. 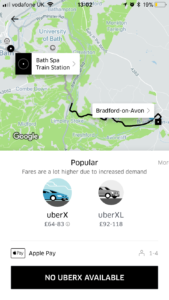 “We get told by some drivers that they don’t drive in heavy snow, not purely for safety reasons but because if they put collision insurance a taxi they pay an extra few thousand pounds a year which in current market conditions they cannot afford to do,” said Fareed Baloch from zoom.taxi which works with private hire companies around the globe.

“A lot of drivers also don’t venture out in adverse weather conditions because if they get into an accident it can put them out of work for weeks. Even though the risk gets higher, the rates they charge stay the same unless it’s Uber who can capitalise – or some might say exploit – the bad weather by using their surge pricing, which it seems they are using to the maximum right now.”

Meanwhile prices in London where the snow has melted are at their usual prices.

“What our customers can benefit from is our driver apps which are equipped with navigation that gets the traffic congestion updates in real time, and suggest the best route to follow,” he added.