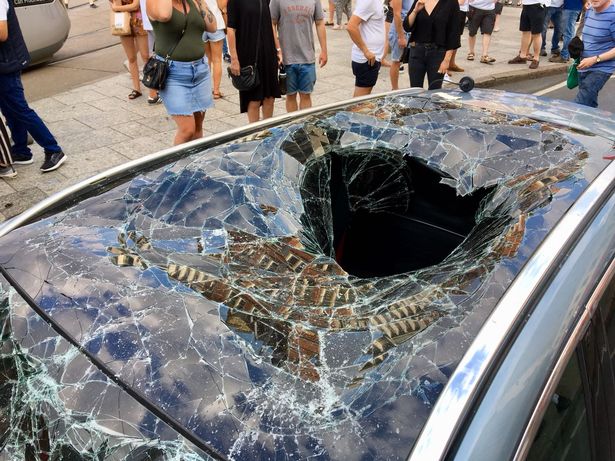 Posted at 11:48h in News by Fareed Baloch
Share

England fans who smashed up a taxi after England beat Sweden in the World Cup quarter finals have been warned “you will be banned”.

The message to the two thugs was given by a top council officer in Nottingham as footage emerged of two men jumping up and down on a seriously damaged vehicle.

Richard Antcliff, head of licensing and managing anti-social behaviour for the city council, said that the men responsible will face “the full wrath” of the law.

He called their actions “a mindless act of criminal damage” which has left a taxi driver for Nottingham Cars struggling to make a living after losing his vehicle.

In response, people have set up a page to help the driver get his taxi back on the road.

The anti-social behaviour team are working with Nottinghamshire Police to identify two men, one described as having a Nottingham Forest tattoo on his right calf and tattoos on his arms. A second man was topless, holding an England flag and has tattoos on his chest and arm.

It is not the only incident of mindless violence which followed the victory for the national football team: in London a young woman has been arrested after she and others destroyed an emergency response vehicle.

Photos were widely spread on social media calling for people to identify a woman who thought the best way to celebrate the victory was to vandalise a London Ambulance Service vehicle whose driver was responding to an emergency call was to cause around £5000 to the car which has had to be taken out of service.

In a tweet yesterday, Poplar Police said they had identified the woman concerned.

Tower Hamlets Police also thanked people for sharing photos of other people who had also partaken in the vandalism and said they thought they would ‘enjoy’ explaining their behaviour to the courts.

Keep tweeting the photos. Fairly sure every single one of them will enjoy explaining to the courts why they thought damaging @Ldn_Ambulance vehicles was the appropriate response to @England winning. https://t.co/oVRbihhn6M