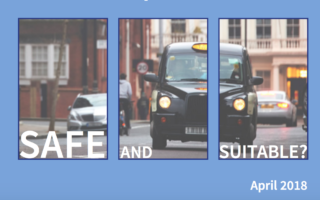 Posted at 12:12h in Driver App by Fareed Baloch
Share

Bradford Council are proposing new measures for taxi and private hire drivers which could see drivers with serious convictions banned for life.

The local authority has set up a survey asking the industry and members of the public for their opinions on new measures designed to crack down on rogue drivers and withdraw licenses for those who break the law.

The proposals are designed to improve safety and security for passengers within the city alongside the councils of Calderdale, Leeds, Kirklees, Wakefield and York.

It includes proposals to withdraw licenses immediately and not renew for ten years in certain circumstances including:

The policy will also look to reduce the number of penalty points a driver may have on their licence for motoring convictions.

Those taking the survey are asked if they would like any new measures to apply retrospectively to those currently working as a licensed driver.

Fareed Baloch of Zoom.taxi which has been campaigning for tougher rules for drivers said the move was “a step in the right direction.”

“Bradford Council look to be addressing the concerns people have although I am rather bemused as to why someone convicted of possessing a weapon would not have their license withheld for as long as someone convicted of an offence involving violence: The idea of a driver wielding a gun or a knife is abhorrent – just as it would be for a passenger to do so.

“I am also pleased they are looking at a zero tolerance approach to anyone convicted of exploitation or sexual offences.

“We know that sadly taxis and minicabs were used in the repellant crimes involving child sexual exploitation and everyone I have spoken to in the industry wants to make sure that kind of crime does not happen again. We believe the best way of doing that is with tougher measures instead of just handing out licenses to anyone who applies.”

But Mr Baloch said that rules from central government meant that there were still “loopholes”.

“The fact that you have licensing authorities like Wolverhampton awarding licenses to drivers from outside the area who can then operate around the country – something we know is particularly prevalent for Uber drivers – means that these tougher rules can be sidestepped.

“There needs to be a move from central government to ensure nationwide rules because it is not practical to say that cars can only operate within licensing boundaries.”

Cllr Sarah Ferriby, Bradford Council’s Executive Member for Healthy People and Places, said: “We are working closely with our neighbouring Local Authorities to ensure a common standard for drivers across West Yorkshire.

“We believe that the introduction of a new policy will provide greater confidence for those who use hackney carriage (Taxi) and private hire vehicles and will also ensure that our passengers are as safe as possible, which is the number one priority for Bradford Council.

Licensed Operators may contract work across Council boundaries and it is therefore important we all work to the same, or similar standards, when licensing drivers in order to protect the public.”

Mazar Iqbal, chairman of Bradford’s Hackney Carriage Owners and Drivers Association, said he agreed with some aspects of the changes.

He said: “If someone has a criminal record for something like rape or drug dealing, which are dangerous to the public, they should not be driving a taxi.”